TV-series Team Chocolate received the Prix Europa in Berlin for Best TV Fiction Series. Earlier this week the production also won the Diversity TV Excellence Award in the category Fiction Series at Mipcom in Cannes. Several weeks ago there was the Special Mention at the Prix Italia for the series made by De Mensen.The series follows Jasper Vloemans (Jelle Palmaerts), a young man with Down syndrome who starts his first job in a family-run chocolate factory. He soon falls in love with one of his colleagues, Tina, a girl from Kosovo. When Tina is suddenly deported to her home country, Jasper and his friends set out on a road trip across Europe to find her.

This week ‘Tytgat Chocolat’ already won the Diversity TV Excellence Award in the fiction series category during Mipcom in Cannes. A few weeks ago there was a special mention on the Prix Italia of this series produced by De Mensen. The series has just been shown on one and on 26/10 there is a final "making of" on one. She revolves around Jasper Vloemans who works as a packer at the Flemish chocolate company Tytgat Chocolat. He falls in love with Tina, one of his colleagues who is of Kosovan descent. When she is deported to her native country, her friends travel after her. 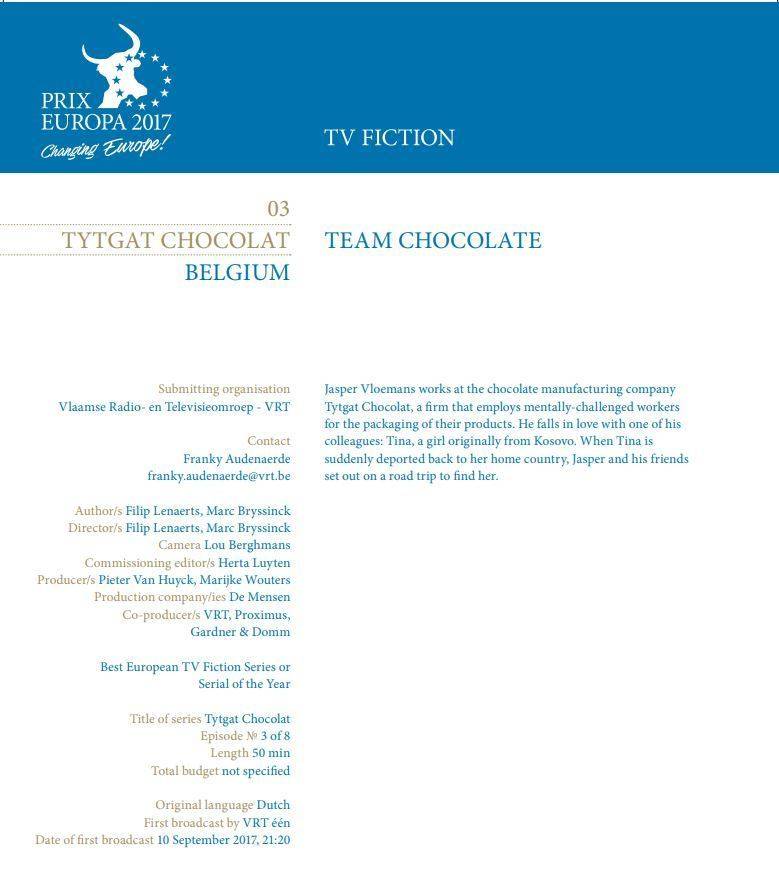 Announcement for a new documentary project in 2022

Belgian broadcaster VTM and director Jan Verheyen make an international documentary series about the Heysel drama that occurred on 29 May 1985 and where thirty-nine people died and 600 were injured when fans were crushed against a wall that then collapsed during the European Cup final between Liverpool and Juventus, after crowd trouble culminated in a surge by Liverpool supporters towards the Italian team's fans

News posted by HLN.be In late 2019, Arno Hintjens (71) was told he has pancreatic cancer. The singer, who has been making music for over half a century with songs like "O la la la c'est magnifique" and "Les yeux de ma mère," has since become national heritage. Former neighbor and director Dominique Deruddere (63) saw in the life story of the Ostend Brusseler the ideal scenario for the documentary: 'Charlatan, the life of Arno Hintjens'.

With 500,000 paying spectators he is by far the most popular Belgian film of the past year, he is even better than all other Flemish films released in 2019 together.

ALL of US - Speeddate with director Willem Wallyn by CINEVOX

Review "ALL OF US" by NEWSMONKEY

"FC De Kampioenen - Viva Boma!", The film may welcome its 400,000th paying visitor tomorrow. The film was thus the absolute number 1 in Flanders during the Christmas holidays and attracted more spectators than all other Flemish films released in 2019 together. Film distributor Independent Films reports this in a press release.

Première ALL OF US @ FILM FESTIVAL GENT 2019

All of us is the tragicomic story of housewife Cathy (Maaike Neuville), who only has a few months left to live. She ends up in a self-help group of terminally ill patients (Joke Devynck, Jan Hammenecker, Bruno Vanden Broecke), led by therapist Els (Barbara Sarafian), who herself is in a full midlife crisis. Cathy decides not to inform her family about her condition, but she has a plan. Together with the other members of the support group, she starts shaping her future plans and those of her fellow patients.

At the closing ceremony of the 25th edition of Short Film Festival Leuven, 18 prizes were awarded this year. This year, a striking number of student works were awarded prizes in the Flemish competition.

INTEGRATION made in Denmark

"Pano" report about the Danish integration model: does this inspire our politicians?

The Perfect Choice For Car Shoots (published by ROSCO)

Building a sustainable career in a sector that often works on a project basis...